Find this article at:
go.ncsu.edu/readext?470303
— Written By Rob Hawk and last updated by Kerri Rayburn 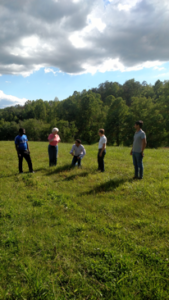 The pasture pictured here is in Swain County and has been re-seeded and allowed to rest with proper fertilization and weed mowing. NC State Extension Specialists Dr. Miguel Castillo and his students, along with local horse owner are seen here studying a renovated horse pasture on June 7, 2017.

The drought of Fall 2016 is slowly improving across Jackson and Swain counties with new growth of established and re-seeded pastures showing signs of success due to the recent rains since winter. Most horse pastures needed some replanting of grasses, along with fertilization to stimulate the roots for greater growth. If pastures were left to rest during this first growing season since the drought, they are doing better than those pastures that had horses still grazing.

A few things to consider for horse pasture management, especially after over-grazing and/or drought includes balancing the height of the forage and the nutritional and exercise needs of the horse. Stocking rate is normally one 1000 lb. horse per 2 acres is generally recommended. With all other factors being the same, two 500 lb. horses could be grazed per 2 acres. Productive horse pastures begin at establishment. Whether you are seeding a new pasture or renovating an existing one, a soil sample should be the first step. By using soil test recommendations, you can adjust soil pH and fertility levels to optimum levels, greatly improving seeding success. Reseeding, if needed, pastures during the Spring and better yet during the early fall also give a boost to these pastures for the next grazing season.

After re-establishing pastures, it is best not to graze below 4”-6”. Clipping weeds and grass to this height will also help. Pasture systems with pure grass stands are useful for early spring and fall grazing, while legume-grass mixtures provide excellent mid-season grazing. Manage pastures to benefit forage stands and horses. Forage species have high energy and protein levels prior to maturity, but these diminish greatly at heading. Graze pastures to prevent forage species from attaining seed heads. Controlled grazing helps to prevent heading out and allows rest periods for your forages. Overgrazing and less commonly, under grazing present pitfalls to horse pastures. A small number of large horse pastures is hard to manage. Usually, some areas are overgrazed, while other areas are under grazed and become mature. Try to divide pastures into smaller paddocks, and rotate horses through on a schedule to manage forage maturity to optimal height not below 4”-6.”

Spreading and dragging the horse manure is another practice that can help with establishing better pastures and save on fertilizer costs, while breaking down the manure more quickly. Companion grazing is another underutilized management tool often overlooked by horse owners. Grazing horses with other species, be it cattle, sheep or goats, promotes better forage utilization, as one species will graze closer to manure of another species than they will their own. In turn, when one species ingests the parasites of another, the life cycle of the parasites ingested is interrupted, and effectively eliminated, and vice-versa.