Find this article at:
go.ncsu.edu/readext?447389
— Written By Rob Hawk and last updated by Kerri Rayburn

Horses are a major part of our agriculture and tourism economy across our landscape. They are also an important part of Appalachian and American heritage. Horse helped build our country. Proper pasture management is important to keep this an active and viable part of culture and agriculture.

The drought of late 2016 has taken a toll on livestock pastures across Jackson and Swain counties with horse pastures possibly experiencing the worst punishment since horses tend to graze lower, which leaves shorter blades of grass to capture solar energy to regrow. Horses, being selective grazers, greatly influence the productivity of a given pasture. Horses, as opposed to cattle, bite grass cleanly leaving a short stubble height. Preferring young, immature plants, they will often graze these down to bare soil, which is very hard on pastures during times of drought.

Bringing back these pastures will take time and good pasture management with reseeding. Productive horse pastures begin at establishment. Whether you are seeding a new pasture or renovating an existing one, a soil sample should be the first step. By using soil test recommendations, you can adjust soil pH and fertility levels to optimum levels, greatly improving seeding success. Also score your pasture on live plant coverage, vigor, diversity, % of legumes and plant residue by scouting pasture closely to ground and large landscape.

Try to keep pasture mixtures simple. Two grasses and one legume species is a starting point. Bluegrass in mixtures, with tall fescue and Orchardgrass, helps provide a dense, solid turf, which is very palatable and heals easily from damage. Bluegrass does best on more neutral soils, but produces less forage than other grasses and slows down tremendously during the hot summer months. 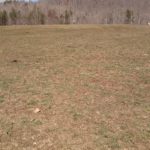 Cool season grasses, such as tall fescue and Orchardgrass are higher yielding. These grasses, however, if allowed to mature, greatly decline in nutrient content and palatability. Newer endophyte friendly and endophyte free varieties of tall fescue have a higher palatability and lessen problems with endophyte toxicity. These grasses don’t take close grazing very well, as plant reserves are stored in the crown, close to the soil.

Legumes added to pastures, help improve soil fertility, and provide higher nutrient levels to horses. Slobbering, always a concern to horse owners can be minimized by keeping clover levels to 35-40% of the forage mixture. The addition of clovers or other legumes will also reduce nitrogen requirements of a pasture, and since horses don’t bloat, legumes such as clovers, lespedeza and alfalfa, can and should be utilized.

Seed in March and/or mid-late August, September 15 at the latest. Can seed with “Frost-Seed” technique or with “Seeder.” August seedings are usually ideal because the soil is dry enough to prepare a firm, well-graded seedbed and seeds germinate quickly in warm temperatures. Root development is favored due to slower top growth due to cool weather. Weed competition is at a minimum and moisture is ample as fall rains become more prevalent. Additionally, you receive early use of pasture or a full hay production season next year.

A good pasture mixture is 10lb Kentucky bluegrass/Tall Fescue mix, 6 lb. orchardgrass and 1 lb. ladino clover per acre. Fertilize before rain. Do not graze the new seeding until grass is 6 to 8 inches high. Best to cut grass one time at 6” before grazing first time, if possible. It is best to wait 8 months to a year to let pastures full establish. Do not graze below 4 inches during the first year of establishment.