Find this article at:
go.ncsu.edu/readext?443950
— Written By Sherrie Peeler and last updated by Kerri Rayburn

Katy Hooper was one of those fascinating people:  she had seen an article in the Sylva Herald on the aprons our volunteers make here at the Extension office for the Appalachian Women’s Museum. Katy ordered twelve aprons. During our conversation I learned that she had grown up in Tuckasegee, NC. Katy was a Hooper and married a Hooper, left Tuckasegee in 1951 to work in Transylvania County, and retired from DuPont where she prided herself on knowing the name of every DuPont employee. Katy and Mary Jo also took piano lessons from my husband’s grandmother, Ila Jackson who lived in the same community.

Well before Katy’s apron order could be completed she passed away. Since her passing I have meet her two children Marie and Tommy who I went to school with in Brevard when my father was stationed in Transylvania County with the NC Highway Patrol and her sister Mary Jo Hooper Cobb who moved with her family to Ohio in 1954 and later returned to Tuckasegee after her retirement. 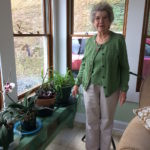 As I drove into the Hooper home place I was met by Katy’s sister Mary Jo who is such a warm gracious hostess. The focal point of her remodeled home today is the 1810 chimney remaining from the original Hooper home. Their home was the gathering place of the Hooper family during the Great Depression and like my own family Mary Jo reminded me that I could never imagine a time when families had so little. All extended family members of Asycue and Gladys Denton Hooper were welcome whenever they needed shelter – if they had lost a job or were looking for another. Ayscue and his wife hired local neighbors for $.10 an hour to harvest their corps of tobacco, green beans, potatoes, or corn during the growing season. This home is located in a picturesque valley along the Tuckasegee River. The fertile bottomland supplied the family with vegetables canned in a huge black kettle that held 18 one half gallon jars or thirty-six quart jars and hogs that were processed there on the farm. The whole hog was canned and you could see Mary Jo’s delight as she described the tenderloin and sausage she and her siblings enjoyed while sitting on the depression green bench at her family’s table. Today the same bench holds the hearty plants in her sun room.

Generations of the Hooper family were members of the Tuckasegee Baptist Church and were all baptized just behind the church even when the “mush ice” was flowing on the Tuckasegee. Generations of the Hooper family also lived together in the original home and another Asycue Hooper constructed by combining three dismantled worker cabins from Blackwood Lumber Company after its closing in the latter 1930’s. Katy’s was delivered right there in the original home by her grandmother was a certified midwife and had delivered over one hundred babies throughout the community. Katy’s mother wanted to buy her a “Shirley Temple” dress but it was $.25 so instead her grandmother used feed sacks to make her dresses.

Being an Extension Agent I was so interested to here that the Hooper children were members of the Tuckasegee 4-H Club. Today, I would not be your agent if a friend had not invited me to a 4-H meeting. So much information remains of how the Extension office was used for advice on crops and livestock.

My whole life I have heard of the 1940 flood. My own mother has shared many times how she lost her only pair of shoes off her porch in Caldwell County during that flood. Jackson County was not spared devastation as Mary Jo pointed out where the high water mark was on the road into there home during that historic flood of 1940. The Doc Moses store was lifted off its foundation and floated down the valley and folks still say you could still see the the oil lamp burning on the table inside the store it was swept down river.

My life has been enriched by having the opportunity to serve you along with the Hooper’s as your Extension Agent.