Find this article at:
go.ncsu.edu/readext?361487
— Written By Rob Hawk and last updated by Kerri Rayburn 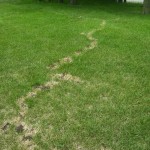 Moles tunnel through the soil with their oversized front paws. Forget the ground hog, there’s one sure sign spring is on the way popping up in yards all over North Carolina – mole tunnels. Though moles tunnel actively all year, the tunnels they make in spring and fall are usually more obvious because they are closer to the soil surface. Unfortunately, there is no easy, fast solution to rid a yard of moles. Instead, effective mole control relies on patience, persistence, and a little knowledge about their habits and behaviors.

The Ways of Moles

Moles spend the vast majority of their lives underground seeking food, with earthworms, snails, slugs, grubs and other insects making up the majority of their diet. The natural life span of an eastern mole is around three years, and during this time they will often eat up to 100% of their body weight in worms and insects each day as they churn through the earth at speeds of up to 18 feet per hour. While raised, dome-shaped tunnels are the most frequent sign of mole activity, moles will also occasionally dig out living chambers deeper in the earth, pushing excess soil out above ground. This results in mounds of loose soil that are commonly known as mole hills.

Moles generally lead solitary lives and are believed to be fairly territorial. Adult moles reproduce once a year, with females giving birth to between two to five babies in spring. These young moles strike out on their own when they reach five to six weeks old. Though homeowners often think they have multiple moles living in their yards, this is often not the case. Extensive damage can be caused by one mole, which may create up to 150 feet of new tunnel each day.

There are a plethora of home remedies touted for mole control – unfortunately none of them work. Many commercially available products, such as sonic vibration devices and castor bean repellents, have not been scientifically shown to have any effect either. In reality, mole control is very difficult and even if you get rid of the mole living in your yard right now there is nothing stopping a new one from moving in. The problem is the conditions where grass grows best, where the soil is well drained, loose, and reasonably fertile, are also the conditions preferred by moles.

Reducing the amount of insects in the soil by broadcasting pesticides throughout your lawn is sometimes touted as way to reduce mole damage but this is rarely effective and not recommended. Most soil applied pesticides target specific insects, such as white grubs or mole crickets. Moles, on the other hand, eat a wide array of insects with earthworms being one of their favorite foods. Most lawn insecticides do not kill earth worms, which is a good thing because earthworms are highly beneficial to lawns and gardens. In some cases treating your lawn with pesticides can even increase mole activity in the short term because moles will have to tunnel further to find enough insects to eat.

The most effective mole control method is trapping, but successfully trapping moles takes time and patience. Two types of traps are available, live traps and kill traps. To use either successfully you must first find out which tunnels your mole is actively using by mashing them down each day and checking the next day to see which ones have popped back up. Traps should be set in the tunnels that are popped back up and checked daily. Both have their drawbacks – kill traps can be difficult to use and dangerous, while with live traps you must do something with the captured animal. In addition, since moles are a native mammal with no declared hunting season in North Carolina, to legally trap moles (live or dead) a person must get a trapping permit from the NC Wildlife Commission. These permits are available anywhere hunting and fishing licenses are sold.

For more information on how to control Moles, please contact Jackson and Swain County Extension Director Robert J. Hawk at 586-4009 or 488-3848 or email Robert at “robert_hawk@ncsu.edu”