Find this article at:
go.ncsu.edu/readext?345240
— Written By Christy Bredenkamp and last updated by Kerri Rayburn

Farming blueberries in North Carolina is a flourishing industry ranking 6th in the nation. Wholesale farms in the Bladen, Pender and neighboring county area along with “pick-your-own” farms throughout N.C. produce approximately 40 million pounds on 5,500 acres with a value of roughly $70 million per year. What’s encouraging is that blueberry production has increased remarkably in North Carolina from 2,700 acres yielding 5,000 lbs. per acre in 2001 to an expansion of 5,500 acres yielding 7,100 lbs. of blueberries per acre in 2010. This can be explained in part with the rise in blueberry popularity, along with improved technologies of: irrigation, harvesting, freezing and storing systems along with newly developed cultivars. 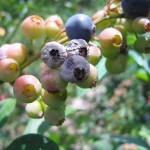 Blueberries are native to North America. Explorers such as Samuel de Champlain in 1615 made note of observing Native Americans harvesting wild blueberries along Lake Huron. Today, tourists and locals may be spotted harvesting wild blueberries along the Blue Ridge Parkway and other mountain roads and trails. Enthusiasts who love making blueberry pancakes, smoothies, cobblers and other yummy edibles will find their precious ingredients in the fresh or frozen sections of local grocery stores, at farmers markets, or a gardeners own backyard.

Blueberries are relatively easy to grow with special modifications. Fans of this delicious berry may choose from a wide assortment of Highbush or Rabbiteye cultivars.

Site Selection and Planting – Transplant plants in full sun for best production. Blueberry plants will tolerate up to 50 percent shade but yields will lessen as shade increases.  For an average sized family, 10 shrubs will provide an adequate supply for fresh use with excess for freezing, jelly or jam. Cross-pollination is critical with Rabbiteye blueberries therefore plant two or more varieties within 100 feet of each planting.  Space Rabbiteye Blueberry plants six (6) feet apart in the row with the rows ten (10) feet apart. Space Highbush blueberry plants every five (5) feet in the row and eight (8) feet between rows.

Choosing Cultivars – There are two points to consider when choosing the right cultivars for your patch. The first is elevation and the second is tolerance to mummy berry. If your elevation is above 2500 ft., then choose Highbush types as they will consistently survive winter temperatures below 10 degrees F. If your elevation is below 2500 ft. then both Highbush and Rabbiteye cultivars will do. The second point is in knowing which cultivars are susceptible to the fungal disease mummy berry. This disease infects the fruit when blueberries are flowering but will manifest “mummy like berries” before harvest. The following list is based on field observations and a Rutgers study in 1995. None are labeled as resistant.

Rabbiteye cultivars that are highly susceptible: “Tiftblue” and “Brightwell.”

Soil Preparation – Blueberries require a lower soil pH of 5.3 or lower (pH range of 4.0 to 5.3). Typically, pH levels in garden and pasture soils range from 5.5 to 6.5. If the soil pH is high, add either ammonium sulfate or sulfur based on soil test results. When it’s time to transplant, ensure planting the roots at the same level observed in the nursery or in the container. Blueberries prefer a soil with a high organic matter content, therefore incorporating materials such as pine bark, aged pine sawdust or rotted wood chips, will promote better root growth and ensure better plant survival. Mulching after planting results in uniform soil moisture, reduces soil temperatures, and promotes better plant growth.

Fertilization – If possible take a soil sample prior to setting out the plants. Knowing your soil pH and soil phosphate levels is extremely important. If using manures mix in the soil when transplanting. If using conventional fertilizers, wait until the first leaves have reached full size, then, apply 1 level Tablespoon of 10-10-10 for each year of the plant (i.e. a 2 year old bush gets 2 Tablespoons). Apply in a circle 1 foot in diameter around each blueberry bush. Gradually increase the fertilizer each year.

Final Suggestions – When setting out new plants, remove all of the flower buds during the first growing season. In year two, remove weak shoots and attempt to keep four main upright canes. Some flower buds may be kept to produce fruit in year two if the bush put on vigorous growth the previous year. Bushes may be allowed to produce a full crop starting the third growing season. Maintain a weed and grass free zone around each plant if possible. For advice on general pruning on blueberries contact your local Cooperative Extension Center.